The rapid development of medical imaging technology is revolutionizing medicine every day. Medical imaging allows scientists and doctors to disclose potentially vital information by scanning the human body non-invasively. The objective of this study is to isolate the pathology through the segmentation; it is considered the heart of medical imaging. Several methods have been proposed to visualize the evolution of the initial shape. In the present work, we propose two methods to define the outline of brain pathology using: Level Set without re-initialization and local region based method. The processed images are given by a magnetic resonance scanner (MRI) 1.5 tesla, of three patients. Knowing that the images are T2, T1 weighted. To give credibility to this study, a comparative study is implemented between the two methods studied. In the final analysis, we will reap the benefits of each method and the Downside.

We have shown that the evolution of the level set algorithm without re-initializing is faster than the algorithm of Local Region based method, but is still less accurate in the localization of the pathology. The evolution of the algorithm local region based methoda is very slow but much more accurate than the level set method without re-initialization. The only inconvenience is the requirement to initialize the curve C adjacent of pathology instead of taking the whole image. 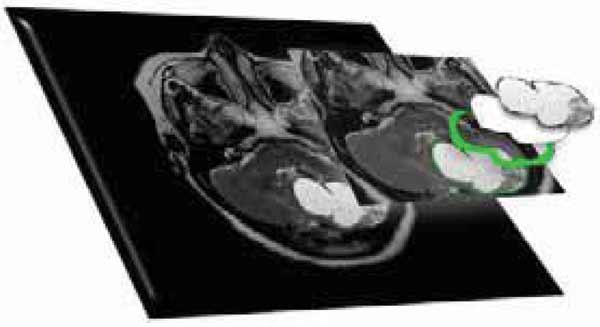