Backgroud: Lung cancer is the most common cancer in terms of both incidence and mortality. Where medical science is playing its role to overcome this deadly disease, new advancements's and research areis also going on in computer science especially in the domain of image processing to support doctors and radiologists to tackle it. Developments are going on in image processing and CAD evaluation for applications that include cancer screening, diagnosis, and image- guided intervention, and treatment.

Methods: The most efficient way to stop the cancer is to detect and diagnose it at an early stage. Most of the existing CAD systems monitor the growth of lung nodules over a period of time, which is not possible at the early stage of lung cancer. In case of lung cancer treatment in Pakistan, even if the cancer is at later stages, there are no such archives in which the history of patient is maintained. So in that case, it becomes extremely important to develop such system which detects lung cancer at its early stage without depending on the requirement of patient history. Secondly, majority of the CAD systems require training prior to use and after the training, they still cannot’t produce satisfactory results. And the last point is most of the scanners comes with built-in software and most of the scanners do notesn’t support third party software's.

Results: In this study, a CAD system is proposed for the detection of malignant nodules through traditional image processing techniques fused with the techniques used by radiologists. The system goes through three main phases; pre-processing, segmentation and 3D reconstruction. In the first phase, pre-processing techniques weare used to remove unwanted information and enhance the image for further processing. During the second phase, the nodule wais detected and localized and in the last phase, 3D reconstruction of the nodule is performed for better visualization that supports the radiologist and the surgeon/doctor. At By the end of the study, we have discussed the performance of our CAD system on LIDC dataset.

Discussion: This dataset consists of 1018 cases from which we randomly selected 340 cases and compared the results of our methodology using four different scenarios against studies which have used Artificial Neural Networks (ANN) and Support Vector Machine (SVM).

Conclusion: The methodology used in this study, clearly outperforms in two out of the four scenarios when compared to ANN and SVM. 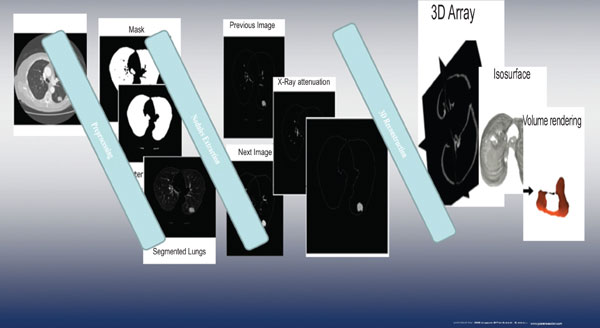