Changes in the Anatomical Nomenclature of Sella Turcica: Turkish Saddle


Background: ‘Sella turcica’ was first described in 1543. The “De humani corporis fabrica” is the name of a book by Andreas Vesalius that first described the ‘sella turcica’. After this date, it was called the ‘sella ephippi’, ‘sphenoidis sella’, or ‘sella equine’. In 1627, the famous anatomist Adrianus Spigelius developed the current definition of the term.

Discussion: The Ottoman military power was at its highest level and a serious threat to Europe at the time so it was indicative of the sense of Turkish power to use ‘sella turcica’ as a medical term. Spigelius had investigated Turkish daily life, art, and culture in the sixteenth century, and Turks were common exemplars of an orientalist fashion that was being pioneered in Europe, which may be how this term came about. ‘Sella’ was used because of its similarity to the Turkish saddle; other such similarities included the amygdala and pear, hippocampus and almond, and priformis and seahorse.

Conclusion: In this study, the anatomical, hormonal, and historical characteristics of ‘sella turcica’ are reviewed. 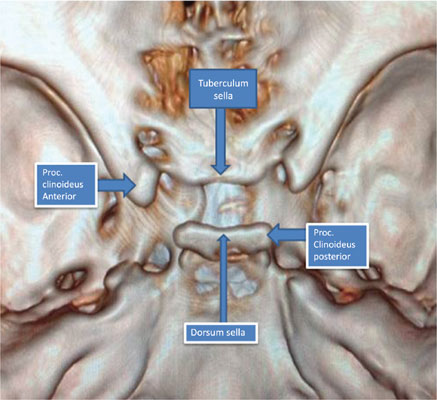