Methods: The retrospective data of 86 patients to whom CT-guided PCTTB had been applied were obtained. Eighty-four cases and their pathologic results were included in the study. Localization and appearance of the lesions, pathologic results, and complications were evaluated.

Results: Diagnostic sensitivity of CT-guided PCTTB was 97.6%. In 60.7% of the cases, malign lesions and, in 39.3% of the cases, benign lesions were diagnosed. The mass size was on average greater than 2 cm, and one mass was detected as being more than ≥2 masses. Mainly, irregular contours were observed. Most of the malign tumors were primary malign tumors on both sides (91.7% on the right side and 88.9% on the left side). Squamous Cell Carcinoma (SCC) was the most often detected malign tumor on the right side, and adenocarcinoma was the most often detected malign tumor on the left side. In masses localized on the left inferior lobe, metastasis was often detected. When the number of the mass was ≥2 and the mass had the appearance of consolidation, metastasis was usually detected. Small and large masses were mainly localized on right and left upper lobes. In the small mass group, 75.0% of the cases were benign, and, in the large mass group, 64.5% of the cases were malign (p=0.031, χ2=4.666). Pneumothorax was the most commonly occurring complication (23.8%). In masses localized on the right lower lobe, the pneumothorax ratio increased in benign masses compared to malign masses. The hemorrhage detection rate was 13.0%, and hemoptysis occurred in 14.2% of the cases. Hemorrhage was detected during 11.8% of the large mass biopsies. In females, hemorrhage occurred more often than in males (p=0.026, r= 0.244). 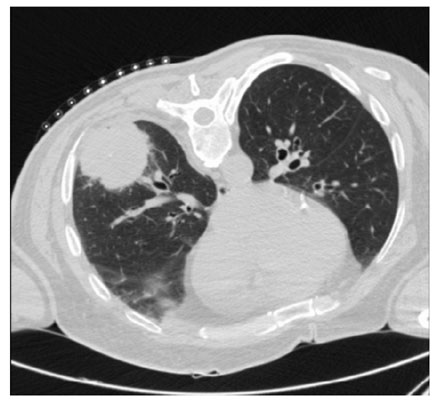