Background: Intraductal papillary mucinous neoplasms (IPMNs) are among the important premalignant lesions. Early detection and intervention are critical to positive patient outcomes. Magnetic resonance imaging (MRI) can be used to evaluate the malignancy of IPMNs, and magnetic resonance cholangiopancreatography (MRCP) is recommended for follow-up of pancreatic cystic lesions.

Objective: To evaluate the diagnostic performance of MRI combined with MRCP in determining the malignant potential of pancreas IPMN.

Methods: This is a retrospective study of 55 patients with 58 pancreatic lesions confirmed after surgery, which were analyzed and divided into two groups, a benign IPMN group (n = 27) and a malignant IPMN group (n = 31). Two radiologists analyzed the high-risk stigmata and worrisome features of pancreas IPMN to evaluate the malignant potential. Score all the lesions as proposed by the international consensus guidelines 2012, and calculate the sensitivity, specificity and accuracy.

Results: There were significant differences of size, enhancement of solid components, and degree of dilation of the main pancreatic duct between benign and malignant IPMN (P < 0.05). However, differences in gender, age and location of disease between the two groups were not statistically significant (P > 0.05). The sensitivity, specificity and accuracy of MRI combined with MRCP in preoperative diagnosis of malignant IPMNs were 90.3% (28/31), 70.4% (19/27) and 81.0% (47/58) respectively, when at least one worrisome feature was present.

Conclusion: MRI combined with MRCP is useful in the evaluation of the benign and malignant pancreas IPMN. 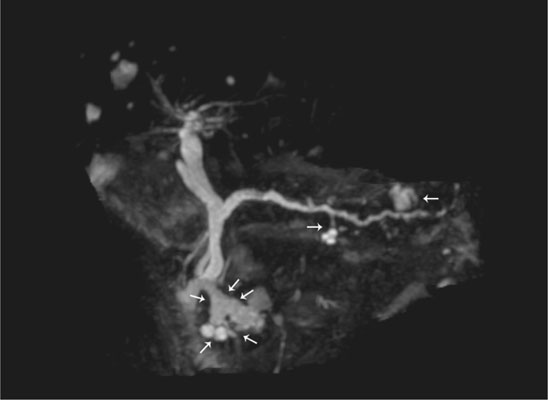