Background: Echocardiography and Cardiac Magnetic Resonance Imaging (CMRI) are two noninvasive techniques for the evaluation of cardiac function for patients with coronary artery diseases. Although echocardiography is the commonly used technique in clinical practice for the assessment of cardiac function, the measurement of LV volumes and left ventricular ejection fraction (LVEF) by the use of this technique is still influenced by several factors inherent to the protocol acquisition, which may affect the accuracy of echocardiography in the measurement of global LV parameters.

Objective: The aim of this study is to compare the end systolic volume (ESV), the end diastolic volume (EDV), and the LVEF values obtained with three dimensional echocardiography (3D echo) with those obtained by CMRI (3 Tesla) in order to estimate the accuracy of 3D echo in the assessment of cardiac function.

Methods: 20 subjects, (9 controls, 6 with myocardial infarction, and 5 with myocarditis) with age varying from 18 to 58, underwent 3D echo and CMRI. LV volumes and LVEF were computed from CMRI using a stack of cine MRI images in a short axis view. The same parameters were calculated using the 3D echo. A linear regression analysis and Bland Altman diagrams were performed to evaluate the correlation and the degree of agreement between the measurements obtained by the two methods.

Results: The obtained results show a strong correlation between the 3D echo and CMR in the measurement of functional parameters (r = 0.96 for LVEF values, r = 0.99 for ESV and r= 0.98 for EDV, p < 0.01 for all) with a little lower values of LV volumes and higher values of LVEF by 3D echo compared to CMRI. According to statistical analysis, there is a slight discrepancy between the measurements obtained by the two methods.

Conclusion: 3D echo represents an accurate noninvasive tool for the assessment of cardiac function. However, other studies should be conducted on a larger population including some complicated diagnostic cases. 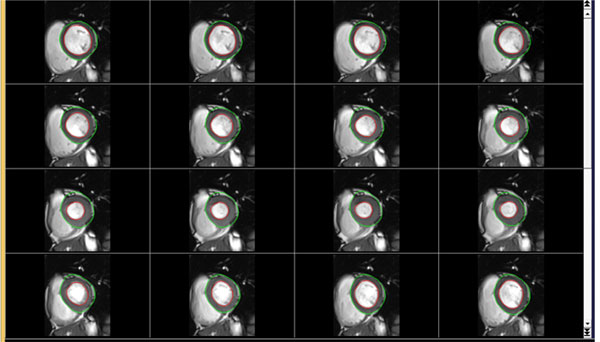