Background: In this study, we investigated the effect of hippocampal subfield atrophy on the development of Alzheimer’s disease (AD) by analyzing baseline magnetic resonance images (MRI) and images collected over a one-year follow-up period. Previous studies have suggested that morphological changes to the hippocampus are involved in both normal ageing and the development of AD. The volume of the hippocampus is an authentic imaging biomarker for AD. However, the diverse relationship of anatomical and complex functional connectivity between different subfields implies that neurodegenerative disease could lead to differences between the atrophy rates of subfields. Therefore, morphometric measurements at subfield-level could provide stronger biomarkers.

Results: We analyzed the subfield-level hippocampal morphometric effects of normal ageing and AD based on radial distance mapping and volume measurements. We identified a general trend and observed the largest hippocampal subfield atrophies in the AD group. Atrophy of the bilateral CA1, CA2- CA4 and subiculum subfields was higher in the case of AD than in MCI and HC. We observed the highest rate of reduction in the total volume of the hippocampus, especially in the CA1 and subiculum regions, in the case of MCI. 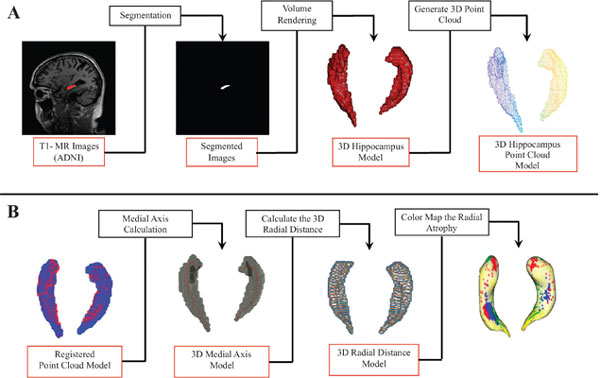