Background: We propose a classification method for Alzheimer’s disease (AD) based on the texture of the hippocampus, which is the organ that is most affected by the onset of AD.

Methods: We obtained magnetic resonance images (MRIs) of Alzheimer’s patients from the Alzheimer’s Disease Neuroimaging Initiative (ADNI) dataset. This dataset consists of image data for AD, mild cognitive impairment (MCI), and normal controls (NCs), classified according to the cognitive condition. In this study, the research methods included image processing, texture analyses, and deep learning. Firstly, images were acquired for texture analyses, which were then re-spaced, registered, and cropped with Gabor filters applied to the resulting image data. In the texture analyses, we applied the 3-dimensional (3D) gray-level co-occurrence (GLCM) method to evaluate the textural features of the image, and used Fisher’s coefficient to select the appropriate features for classification. In the last stage, we implemented a deep learning multi-layer perceptron (MLP) model, which we divided into three types, namely, AD-MCI, AD-NC, and MCI-NC.

Results: We used this model to assess the accuracy of the proposed method. The classification accuracy of the proposed deep learning model was confirmed in the cases of AD-MCI (72.5%), ADNC (85%), and MCI-NC (75%). We also evaluated the results obtained using a confusion matrix, support vector machine (SVM), and K-nearest neighbor (KNN) classifier and analyzed the results to objectively verify our model. We obtained the highest accuracy of 85% in the AD-NC.

Conclusion: The proposed model was at least 6–19% more accurate than the SVM and KNN classifiers, respectively. Hence, this study confirms the validity and superiority of the proposed method, which can be used as a diagnostic tool for early Alzheimer’s diagnosis. 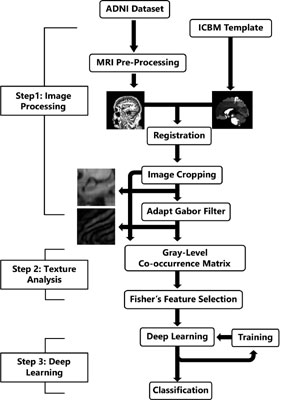