Background: Parkinson’s Disease (PD) is caused by the deficiency of dopamine, the neurotransmitter that has an effect on specific uptake region of the substantia nigra. Identification of PD is quite tough at an early stage.

Methods: The transaxial image slices are selected on the basis of their high specific uptake region. The processing techniques like preprocessing, segmentation and feature extraction are implemented to extract the quantification parameters like Intensity, correlation, entropy, skewness and kurtosis of the images. The Support Vector Machine (SVM) and Extreme Learning Machine (ELM) classifiers using Radial Basis Function kernel (RBF) are implemented and their results are compared in order to achieve better performance of the system. The performance of the system is evaluated in terms of sensitivity, specificity analysis, accuracy, Receiver Operating Curve (ROC) and Area Under the Curve (AUC).

Results: It is found that RBF-ELM provides high accuracy of 98.2% in diagnosing early PD. In addition, the similarity among the features is found out using K-means clustering algorithm to compute the threshold level for early PD. The computed threshold level is validated using Analysis of Variance (ANOVA).

Conclusion: The proposed system has a great potential to assist the clinicians in the early diagnosis process of PD. 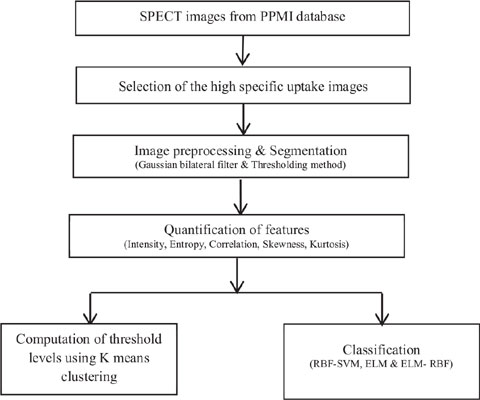