Objective: Isthmuses are narrow communications between root canals, and form as the result of the merging of the two root canals widening in a buccolingual direction. This widening causes the high ovality of isthmuses. The shaping and cleaning of all root canal systems are regarded as one of the major difficulties in long-oval shaped root canals. This study aims to make quantitative analysis of Vertucci type II root canal systems following preparation with Self- Adjusting file (SAF), Reciproc or Revo-S.

Methods: Major diameter and roundness values were measured at the level 1.2 mm from apical foramen before and after preparation. A ‘post-preparation node’ point was described when the minimum minor diameter value was smaller than major diameter of apical 1.2 mm. Data were analysed using one-way ANOVA, Tukey and Chi-square tests.

Conclusion: Root canal preparation with SAF, Reciproc and Revo-S led to a significant increase in the major diameter of apical 1.2 mm and resulted in high frequencies of the post-preparation node. 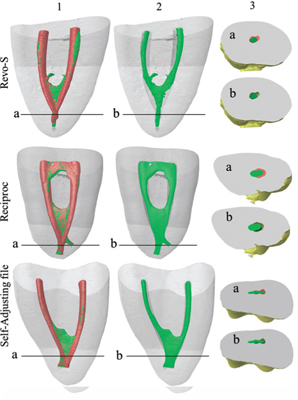