Methods: The task-based functional Magnetic Resonance Images (fMRI) of both high and low functioning autistic groups were acquired from ABIDE database, for 58 low functioning against 43 high functioning individuals while they were involved in a defined language processing task. The language processing regions of the brain, along with Default Mode Network (DMN) have been considered for the analysis. The functional connectivity maps have been plotted through graph theory procedures. Brain connectivity parameters such as Granger Causality (GC) and Phase Slope Index (PSI) have been calculated for the individual groups. These parameters have been fed to Deep Belief Networks (DBN) to classify the subjects under consideration as either LFA or HFA.

Results: Results showed increased functional connectivity in high functioning subjects. It was found that the additional interaction of the Primary Auditory Cortex lying in the temporal lobe, with other regions of interest complimented their enhanced connectivity. Results were validated using DBN measuring the classification accuracy of 85.85% for high functioning and 81.71% for the low functioning group.

Conclusion: Since it is known that autism involves enhanced, but imbalanced components of intelligence, the reason behind the supremacy of high functioning group in language processing and region responsible for enhanced connectivity has been recognized. Therefore, this work that suggests the effect of Primary Auditory Cortex in characterizing the dominance of language processing in high functioning young adults seems to be highly significant in discriminating different groups in autism spectrum. 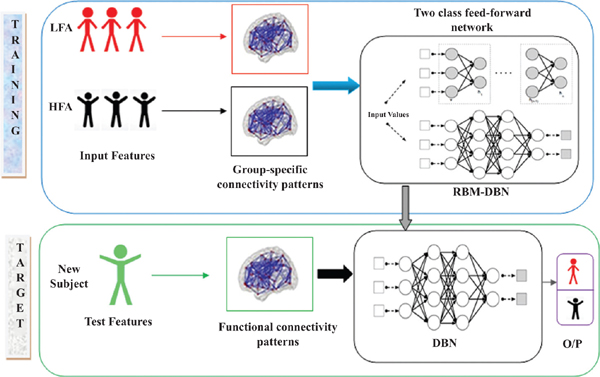