Papillary Tumor of the Pineal Region with Parinaud Syndrome: A Case Report

Case report: A 17-year-old female patient who underwent a treatment of ventriculoperitoneal shunt due to hydrocephalus 18 months ago applied to the neurosurgery clinic with nausea, vomiting, sensorineural hearing loss and Parinaud syndrome continuing through 1 month. Computed tomography (CT) and magnetic resonance imaging (MRI) have been applied. A 58x31x38 mm mass with cystic and mild hyperdense soft tissue components was observed in the localization of pineal gland and posterior comissure on non-enhanced CT. MRI examination revealed that the mass filled the pineal region, contained solid and large cystic components, and hyperintense on T1-weighted images. After intravenous contrast media injection, the mass enhanced more peripherally. DW-MRI showed that there is a diffusion restriction in some parts of the soft tissue components. The mass was totally resected, and pathology report revealed that it is a papillary tumor of the pineal region. Conclusion: When a T1-weighted hyperintense and CT hyperdense mass with cystic and solid components is seen in the pineal region, even if it is rare, papillary tumor should also be considered in the differential diagnosis after exclusion of other hyperintense lesions in T1-weighted imaging. 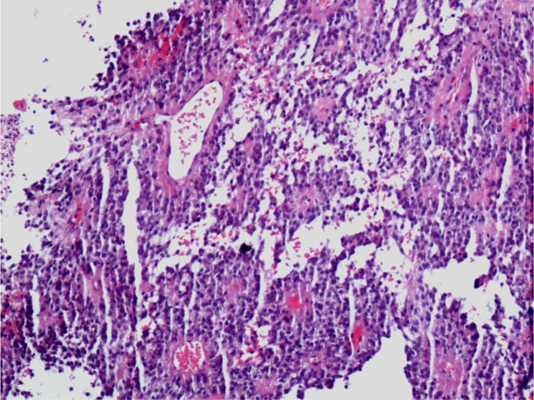