Background: Breast cancer is considered as one of the most perilous sickness among females worldwide and the ratio of new cases is increasing yearly. Many researchers have proposed efficient algorithms to diagnose breast cancer at early stages, which have increased the efficiency and performance by utilizing the learned features of gold standard histopathological images.

Objective: Most of these systems have either used traditional handcrafted or deep features, which had a lot of noise and redundancy, and ultimately decrease the performance of the system.

Methods: A hybrid approach is proposed by fusing and optimizing the properties of handcrafted and deep features to classify the breast cancer images. HOG and LBP features are serially fused with pre-trained models VGG19 and InceptionV3. PCR and ICR are used to evaluate the classification performance of the proposed method.

Results: The method concentrates on histopathological images to classify the breast cancer. The performance is compared with the state-of-the-art techniques, where an overall patient-level accuracy of 97.2% and image-level accuracy of 96.7% is recorded.

Conclusion: The proposed hybrid method achieves the best performance as compared to previous methods and it can be used for the intelligent healthcare systems and early breast cancer detection. 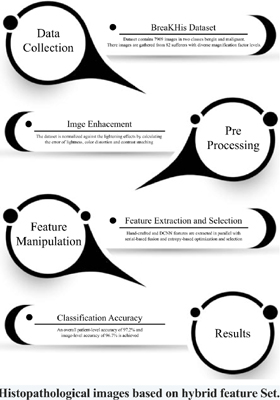