Background: Endometriosis is a pathological state in which the endometrial glands and stroma are originated at sites other than the uterine cavity. Endometriotic cystic lesions are principally positioned in ovaries but, infrequently, can also be encountered in the myometrium. It is a rare manifestation which poses a multitude of differential diagnoses and therapeutic options.

Case Study: A 27-year-old female patient walked into hospital complaining of severe abdominal pain since 2 days with a medical history of dysmenorrhoea since one and a half years. On examination, the abdomen was found to be soft with the existence of lower abdominal tenderness. An Ultrasonography revealed a myometrial posterior wall cyst of size 4 x 4 cm with thick wall and spotted internal echoes favoring a differential diagnosis of either an endometriotic cyst or rudimentary horn. Both ovaries were found normal. The patient was taken for laparoscopy in which a bulge was seen on the posterior uterine wall. It was punctured to expose a myometrial cyst with dark chocolate colored fluid collection. The intact cyst was enucleated and sent for histopathology, which confirmed the diagnosis of the endometriotic cyst. Upon the literature survey, it was found that only two such cases were available in the literature on internet which described a similar pathology.

Conclusion: Endometrioma should be considered as a probable pathology whenever myometrial cysts are encountered. A focused transvaginal examination can be very accommodating as a diagnostic modality to set up proper management. This case should not only make the health careproviders rethink the etiopathogenesis of endometriosis and debate the credibility of the retrograde menstruation hypothesis but also encourage to accurately investigate any lesion anywhere in the body, which looks like an endometriotic chocolate cyst. In this case, it is evident that a myometrial spot is rare but not impossible. These rare occurrences shall direct to diversify the perception of this pathology. 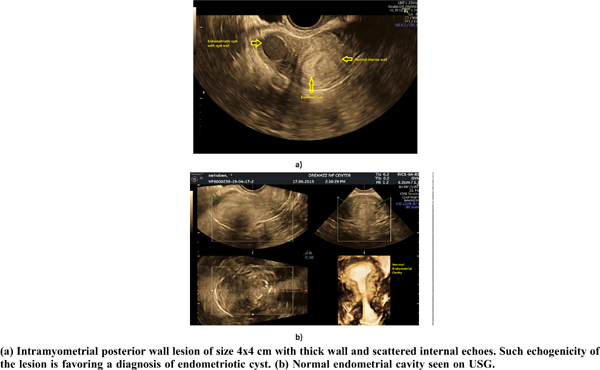