Three-dimensional Pattern of Inflammatory Periapical Lesion Extension in the Premolar’s Region: An Application of K-means Clustering

Methods: In this descriptive study‚ 330 roots in the regions of maxillary and mandibular premolars have been evaluated. Maximum periapical lesion extensions in the three orthogonal planes (axial, coronal, and sagittal) were measured and recorded in millimeters. Measurements were compared based on gender‚ dental arch, tooth type, and root. Statistical analysis was performed using repeated measure ANOVA, Bonferroni, Chi-square tests, and clustering data analysis (K-means method). The significant level was set at 0.05.

Results: There were significant differences between the lesion expansions in the three-dimensional planes (p-value<0.001). The highest average of lesion extension in the premolar regions of the examined population was reported in the vertical dimension (4.1± 1.3), followed by horizontal buccolingual dimension (3.4±1.1) and horizontal mesiodistal dimension (3.1±1.0), respectively. According to independent variables, in the premolar region, only tooth roots showed significant differences in the lesion extension (p-value=0.002). Clustering data analysis showed that the majority of the participants were categorized in a cluster with lower lesion extension. Based on clustering data analysis, the small lesions were significantly observed in the first premolar and buccal roots.

Conclusion: Since the periapical lesion extension in the buccolingual dimension, which could not be detected in the 2-D imaging techniques, was rather high in the region of premolar teeth, and CBCT, as a 3-D imaging technique, is a suitable option for the precise evaluation of periapical lesion extension. Also, the majority of the lesions in this tooth area are small and located in the buccal roots. 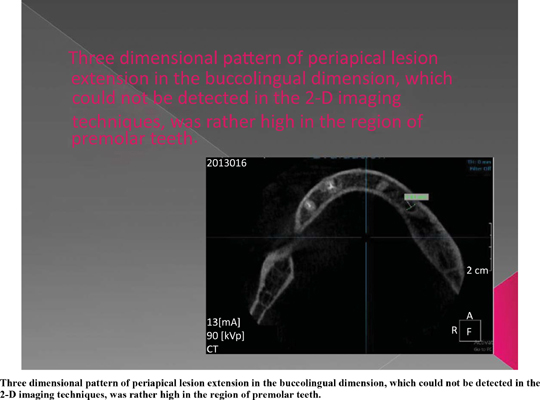